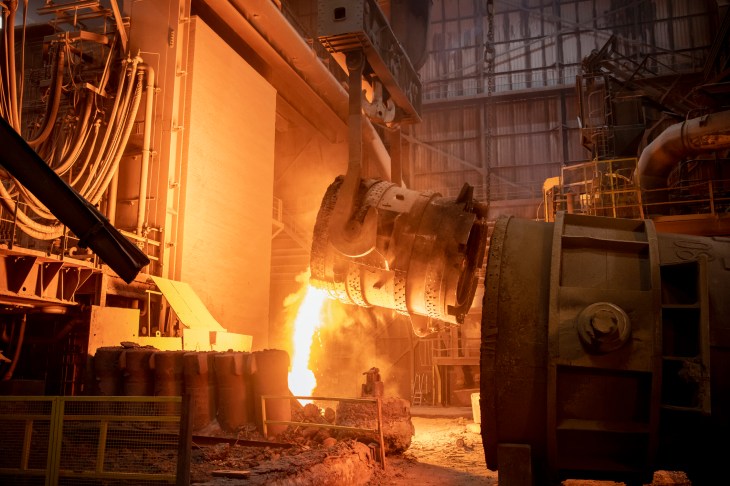 Steel production accounts for roughly 8% of the emissions that contribute to global climate change. It is one of the industries that sits at the foundation of the modern economy and is one of the most resistant to decarbonization.

As nations around the world race to reduce their environmental footprint and embrace more sustainable methods of production, finding a way to remove carbon from the metals business will be one of the most important contributions to that effort.

One startup that’s developing a new technology to address the issue is Boston Metal. Previously backed by the Bill Gates-financed Breakthrough Energy Ventures fund, the new company has just raised roughly $50 million of an approximately $60 million financing round to expand its operations, according to a filing with the Securities and Exchange Commission.

The global steel industry may find approximately 14% of its potential value at risk if the business can’t reduce its environmental impact, according to studies cited by the consulting firm McKinsey & Co.

Boston Metal, which previously raised $20 million back in 2019, uses a process called molten oxide electrolysis (“MOE”) to make steel alloys — and eventually emissions-free steel. The first close of the funding actually came in December 2018 — two years before the most recent financing round, according to Tadeu Carneiro, the company’s chief executive.

Over the years since the company raised its last round, Boston Metal has grown from eight employees to a staff that now numbers close to 50. The Woburn, Massachusetts-based company has also been able to continuously operate its three pilot lines producing metal alloys for over a month at a time.

And while the steel program remains the ultimate goal, the company is quickly approaching commercialization with its alloy program, because it isn’t as reliant on traditional infrastructure and sunk costs according to Carneiro.

Boston Metal’s technology radically reimagines an industry whose technology hasn’t changed all that much since the dawn of the Iron Age in 1200 BCE, Carneiro said.

Ultimately the goal is to serve as a technology developer licensing its technology and selling components to steel manufacturers or engineering companies that will ultimately make the steel.

For Boston Metal, the next steps on the product road map are clear. The company will look to have a semi-industrial cell line operating in Woburn by the end of 2022, and by 2024 or 2025 hopes to have its first demonstration plant up and running. “At that point we will be able to commercialize the technology,” Carneiro said.

The company’s previous investors include Breakthrough Energy Ventures, Prelude Ventures and the MIT-backed “hard-tech” investment firm, The Engine. All of them came back to invest in the latest infusion of cash into the company along with Devonshire Investors, the private investment firm affiliated with FMR, the parent company of financial services giant, Fidelity, which co-led the deal alongside Piva Capital and another, undisclosed investor.

As a result of its investment, Shyam Kamadolli will take a seat on the company’s board, according to the filing with the SEC.

MOE takes metals in their raw oxide form and transforms them into molten metal products. Invented at the Massachusetts Institute of Technology and based on research from MIT Professor Donald Sadoway, Boston Metal makes molten oxides that are tailored for a specific feedstock and product. Electrons are used to melt the soup and selectively reduce the target oxide. The purified metal pools at the bottom of a cell and is tapped by drilling into the cell using a process adapted from a blast furnace. The tap hole is plugged and the process then continues.

One of the benefits of the technology, according to the company, is its scalability. As producers need to make more alloys, they can increase production capacity.

“Molten oxide electrolysis is a platform technology that can produce a wide array of metals and alloys, but our first industrial deployments will target the ferroalloys on the path to our ultimate goal of steel,” said Carneiro, the company’s chief executive, in a statement announcing the company’s $20 million financing back in 2019. “Steel is and will remain one of the staples of modern society, but the production of steel today produces over two gigatons of CO2. The same fundamental method for producing steel has been used for millennia, but Boston Metal is breaking that paradigm by replacing coal with electrons.”

No less a tech luminary than Bill Gates himself underlined the importance of the decarbonization of the metal business.

“Boston Metal is working on a way to make steel using electricity instead of coal, and to make it just as strong and cheap,” Gates wrote in his blog, GatesNotes. Although Gates did have a caveat. “Of course, electrification only helps reduce emissions if it uses clean power, which is another reason why it’s so important to get zero-carbon electricity,” he wrote.