Several large metal shipping containers are lined up in a warehouse under a large American flag. Their doors are ajar and workers stream in and out, power tools buzzing.

These are no ordinary shipping containers: They represent a huge scientific breakthrough in the fight against COVID-19.

"We're looking at the Battelle Critical Care Decontamination System that we've developed to be able to decontaminate PPE for health care workers on the front-line," says Will Richter, a researcher at the Columbus, Ohio-based company.

Hospitals around the country are starting to run low on personal protective equipment such as masks, gloves and goggles. The looming shortage puts health care workers in danger as they treat the influx of COVID-19 patients.

The Critical Care Decontamination System is the first of its kind, capable of cleaning up to 80,000 pieces of PPE (personal protective equipment) at a time.

Battelle's system was designed to be modular so it can be easily shipped and scaled up — the more units in one area, the more rapidly they will be able to clean mass amounts of PPE and return them to where they're needed.

Sunday night, the Food and Drug Administration gave Battelle full approval to ramp up their systems to full capacity and send devices to the parts of the country hardest hit by the coronavirus outbreak.

One system is in route to New York City. Others are destined for Seattle, Chicago and Washington, D.C., to start.

The approval comes after urging from both Gov. Mike DeWine and President Trump.

Even before Battelle's devices had shipped out of Ohio, the state's top leaders were advocating for the system, both behind the scenes and to the public.

DeWine spoke glowingly about Battelle's system at his regular coronavirus press conference this weekend, calling it a "major breakthrough." Lt. Gov. Jon Husted said the state had been working with the FDA for the past week to get approval.

But the FDA's decision was not what Ohio's leaders were hoping for.

Around 8 a.m. on Sunday, DeWine received news: The FDA authorized Battelle's machines to sterilize just 10,000 surgical masks per day — far short of their capacity — and only at the company's Columbus headquarters.

"The FDA's decision to severely limit the use of this lifesaving technology is nothing short of reckless," DeWine wrote in a statement. "I am not only disappointed by this development, but I'm also stunned that the FDA would decline to do all it can to protect this country's front-line workers in this serious time of need."

DeWine then brought the issue to the White House. Later Sunday morning, the governor announced on Twitter that he had a "good conversation" with Trump, who told DeWine he would do "everything he can to get this approved today." 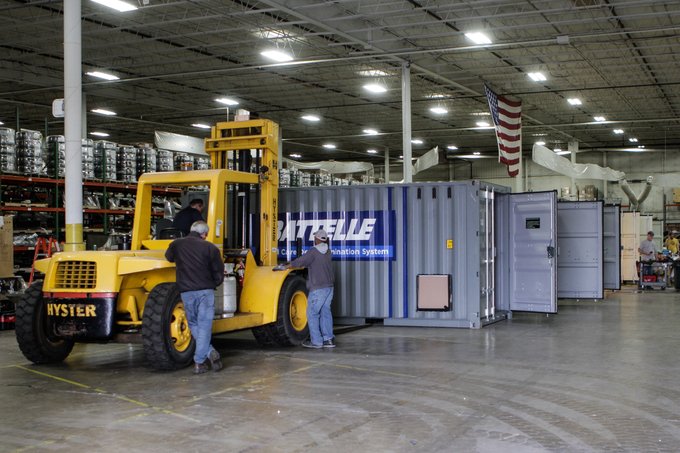 "This is an example of everyone working quickly to help find a solution," said FDA Commissioner Stephen Hahn in a statement. "After receiving Battelle's request today, we turned it around in a matter of hours and issued a new authorization allowing them to ramp up their capability to decontaminate more respirators."

Battelle thanked the FDA for authorization in a statement Sunday night.

"Everybody who has worked on this project shares the same goal of protecting first responders and health care workers who are at the front-lines of the pandemic," said Lou Von Thaer, president and CEO of Battelle.

In a statement, DeWine thanked the FDA and the president for approving the technology.

At Battelle's headquarters in Columbus, WOSU took an exclusive look at how the technology works.

Hospitals will gather used PPE and send it to the closest decontamination machine. A team of four Battelle scientists will put on protective gear and step inside the containers. The outer chamber is an air lock, and the inner chamber sucks contaminated air from the container through multiple HEPA filters, then out through a vent in the back.

Used N95 masks will be laid on metal racks lining the walls. Other forms of PPE, such as goggles, can be hung on metal rods. Once the unit is full, the scientists will exit the main chamber into the air lock. 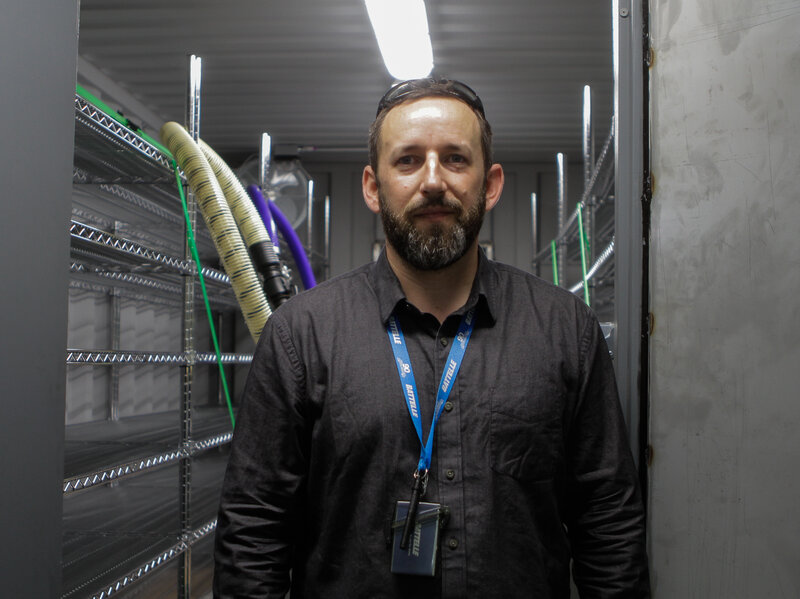 Researcher Will Richter stands inside a decontamination chamber.

They will spray themselves with ethanol to ensure they aren't contaminated, before exiting the entire container and sealing it tightly.

"We inject the vapor at the rear of the chamber, and then the fans ensure homogeneous distribution," Richter says, pointing at fans mounted in the upper corner of the unit. "We then have plumbing running to the front, so it has to travel through the entire length of the chamber before it returns and recycles back to the generator."

Loading the unit, running the decontamination process, letting it aerate, then reloading the cleaned PPE into boxes to be sent back to the hospitals takes about 12 hours.

A forklift drives into the warehouse, lifts the shipping container and loads it onto a truck headed for New York City.

Richter watches as his scientific accomplishment is prepped for deployment.

"It's been a crazy two weeks, we've been working around the clock," he says. "We just want the health care workers to have what they need. I don't want to have any health care worker without PPE, facing that choice, having to go into that room. So yeah, it feels good."