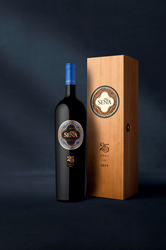 “Colangelo & Partners is a leader in integrated communications, and an expert in fine wine. There is no better team to represent an icon wine like Seña, and we are thrilled to form this partnership with them.” - Eduardo Chadwick, Owner, Viñedos Familia Chadwick SpA

Iconic Chilean winery Seña has announced that Colangelo & Partners, a fine wine, spirits and food-focused integrated communications agency, will be its agency of record in the United States, to develop and execute a comprehensive communications strategy targeted to key media, trade and influencers. The partnership will focus on engaging new and current consumers and collectors through strategic media and trade relations, events and partnerships, and influencer marketing.

“Colangelo & Partners is a leader in integrated communications, and an expert in fine wine,” explains world-renowned Viñedos Familia Chadwick SpA Owner Eduardo Chadwick. “Their esteemed reputation and industry knowledge allows them to execute strategic plans that will bring necessary visibility to our wines, our brand and our story. There is no better team to represent an icon wine like Seña, and we are thrilled to form this partnership with them. As Seña was created through collaboration, we are confident that this partnership will yield comparable success.”

Colangelo & Partners will work on a range of traditional and new media activities in conjunction with the Seña leadership team. The corporate structure includes key new appointments designed to continue to strengthen the organization and add to its agility and dynamic vision. These changes consist of Francisco Zilleruelo appointed as Board Member of Viñedos Familia Chadwick SpA. In his new role, Zilleruelo will act as Executive Director of Seña and Viñedo Chadwick, working closely with Juan Carlos Pagola, who has been appointed as Managing Director of Seña and Viñedo Chadwick. Together with Francisco Baettig serving as Technical Director, Michel Couttolenc as Export Director for the United States and Canada, Eduardo Chadwick’s daughter, María Eugenia Chadwick, as Marketing Director and the rest of the leadership, the team is primed to guide Viñedos Familia Chadwick SpA with dedication and innovation, showing the United States, and the world, Chile’s full potential through the lens of Seña, one of the finest wines in the world.

Board member and Executive Director Francisco Zilleruelo has extensive knowledge of the industry through eighteen years of experience and a degree in commercial engineering from Adolfo Ibáñez University in Santiago. Professionally, his fifteen-year tenure at Viña Almaviva (a joint venture between Baron Philippe de Rothschild and Concha y Toro in Chile) included roles as Commercial Director and later Managing Director. Upon his appointment as Managing Director of Seña and Viñedo Chadwick in 2020, he worked closely with La Place de Bordeaux in the development of the fine wines’ international distribution. Zilleruelo’s expertise and knowledge have helped elevate him to Executive Director and Board Member, with Juan Carlos Pagola moving into his previous role.

Juan Carlos Pagola has been involved in the luxury and travel industry throughout his career, which he brings to his current role of Managing Director of Seña and Viñedo Chadwick. He has a degree in Commercial Engineering and holds a Master’s Degree in Marketing, with past professional roles that include Managing Director of a high-end resort in the Chilean Patagonia. Most recently, Pagola led the Marketing and Commercial Area of TN Coopers, a Chilean cooperage with a presence in more than 35 countries. It is here that he gathered in-depth knowledge in global commercial relations and distribution strategies by leading the marketing and sales strategy. Based in Chile, Pagola will lead the projects and initiatives to successfully develop Seña and Viñedo Chadwick wines in international markets. More specifically, he will embrace the challenge of extending the brands’ distribution to the most relevant wine markets in the world.

“Seña is an incredible, trailblazing winery. We're thrilled to embark on this journey with them, helping to grow their legacy as one of the world’s iconic wines,” notes Colangelo & Partners President Gino Colangelo. “We're eager to communicate their incredible and unique stories, reaching new audiences here in the US and helping them achieve their brand goals.”

Established in 1995, Seña is Chile’s first icon wine; the result of a brilliant collaboration between globally recognized winemaking icons Eduardo Chadwick and Robert Mondavi. The lush terrain of Chile captured the curiosity of Mondavi, who traveled to the area for research in the early 1990s. After meeting Chadwick, the two felt a connectedness within their shared values and decided to create the first icon wine of Chile, serving as a pioneer within its terroir in the Aconcagua Valley: modeled on a Bordeaux style, with a Chilean soul. During the quarter century since its inception, Seña has achieved a perfect 100 score and solidified itself among the top-tier wines of not only South America, but the world. The current release, Seña 2019, marks the 25th anniversary of this iconic, pioneering wine.