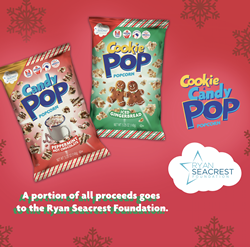 "SNAX-Sational Brands and The Ryan Seacrest Foundation's focus on helping children is such a noble mission. Being a father of two young children, the work of Ryan and the RSF team, and their impact on the Children's Hospital patients, really hit home." - Bobby Kennedy III

To excite consumers about the two new flavors, the SNAX-Sational Brands engaged filmmaker Bobby Kennedy III to direct a video series centered around the iconic Gingerbread holiday season character, a symbol of holiday treats and cheer. The full compilation video series can be viewed here, including the final reveal of Bobby as the Gingerbread throughout the iconic West Coast appearances.
Youtube Video Viewing Link: https://youtu.be/639yw9w2daY

Through a series of dynamic videos shot around Los Angeles at iconic locations and pop culture events, consumers began to wonder, who in fact is this Gingerbread man? They were given bags and bags of the new flavors to sample (500+), and posed for photos with the real life character persona, posting across social media, as crowds gathered. At the Hollywood Gucci Love parade, the buzz was going on while just feet away Miley Cyrus, Lizzo, Lady Gaga, Jared Leto and Billie Eilish were all on hand for the House of Gucci premiere event. Their fans were just as engaged with Mr. Gingerbread man, none the wiser it was in fact Bobby Kennedy III fully covered, head to toe.

Direct Quotes from Bobby Kennedy III on his engagement with Cookie Pop and Candy Pop as the highlighted content creator:

Bobby Kennedy III on the partnership:
"The Ryan Seacrest Foundation's focus on helping children is such a noble mission, that when I was approached with the opportunity to team up with Cookie Pop and RSF on this initiative, I jumped at the chance immediately. Being a father of two young children, the work of Ryan and the RSF team, and their impact on the Children's Hospital patients, really hit home and what they do is incredible."

Bobby Kennedy III on the video content creation:
"I mean, Run, Run, Run....As fast as you can....! - The Gingerbread man is a classic character, and obviously fun to dress up as. To get out there at these iconic LA locations, shooting gorilla style, and dressed as the iconic symbol of the holidays, was a blast. To see the reactions of people on the street was incredible, and they were even more excited to receive the popcorn. The buzz was all around us. The Gingerbread Man is the classic Christmas character, and a perfect alignment with the Cookie Pop brand. Plus, it has DEFINITELY been a bucket list item of mine to dance around on Hollywood Blvd."

“In regards to the video production, it was shot half on IPHONE and half on Black Magic, then edited in post production.” - Bobby Kennedy III

Bobby Kennedy III got his start in filmmaking producing and directing environmental documentaries, and then transitioned with a feature comedy shot in Italy, followed by his most recent film, Fear & Loathing in Aspen, based on the story of Sheriff Hunter S. Thompson and the 1970 election.

Official Video reveal here:
Ryan Seacrest Content: On Giving Tuesday, Ryan revealed he was IN FACT the gingerbread man spreading the delicious holiday cheer. Ryan took to his social media on Giving Tuesday at 11:00am EST to show the big reveal.

RSF Foundation on the partnership:
“We are incredibly grateful to SNAX-Sational Brands for their ongoing support of the foundation and our 11 Seacrest Studios across the country,” notes Meredith Seacrest, Executive Director & COO for RSF. “Brands like theirs help in our mission to bring positive and uplifting experiences to young patients and their families while in the hospital, as well as aid in maintaining current studios and looking to build new ones.”

Having kicked off on #GivingTuesday, the annual global generosity movement that unleashes the power of people and organizations to transform their communities and the world, SNAX-Sational is thrilled to launch its annual #SnackGiving campaign to raise funds for the Ryan Seacrest Foundation (RSF). November 1st - January 31st, it is all about Snackgiving, with a portion of the proceeds of retail sales PLUS ALL proceeds of e-comm sales giving back to the Ryan Seacrest Foundation, benefiting their Seacrest Studios within children’s hospitals across the United States.

The two new seasonal flavors are inspired by signature holiday treats and desserts - Frosting, Gingerbread Cookies, Peppermint Candies and Hot Chocolate. The indulgent combinations of Iced Gingerbread and Peppermint Hot Chocolate, combined with Cookie Pop and Candy Pop’s delicious non-GMO popcorn, makes for the perfect holiday season snack offering to family and friends. AND, it remains guilt-free at only 150 calories per serving.

They were also featured at the annual TOYS for TOTS event in Los Angeles on December 8th, which was hosted by celebrity costume designer and personally Johnny Wujek, and featured a performance by Adam Lambert and Katie Welch. The holiday flavors were featured, and of course a portion of all bag sales goes to the Ryan Seacrest Foundation. SNAX-Sational continues to do whatever it can to support the season of giving, under its SNACKGiving initiatives.

Cookie Pop and Candy Pop are not only delicious on their own, but make for a perfect addition to elevate your holiday treats and beverages. With dessert creations like White Chocolate Peppermint Candy Pop Bark, Holiday Popcorn Cake Pops and Gingerbread Shortbread Blondie Bars to Spiked Frozen Hot Chocolate and Frozen Ginger Chai Chocolate Shakes, these custom Cookie Pop and Candy Pop recipes will be sure to win over friends and family this season. Check out the full recipe details here: https://www.cookiepopcandypop.com/pages/recipes

SNAX-Sational Brands’ premiere power duo Cookie Pop and Candy Pop, continues to be the innovative popcorn snacking leader combining everyone’s favorite things - ready-to-eat popcorn featuring America’s cookie and candy favorites, yielding the perfect, must-have snack creation. The better-for-you-snack is made 100% in the U.S. with non-GMO corn, is low in sodium and only 150 calories per serving. The popular, low-calorie, cookie or candy-coated line was named a “Top 20 Snack of 2020” by Buzzfeed and continues to garner attention amongst consumers, media and celebrities, from Cardi B. to Lance Bass to Robert De Niro to Ashley Greene to Mario Lopez to Cedric the Entertainer.

“We are so thrilled to launch the two new original holiday flavor profiles and continue supporting the incredible efforts of the Ryan Seacrest Foundation, in addition to the Seacrest Studio at Orlando Health Arnold Palmer Hospital for Children which is right in our company's backyard, PLUS the incredible opportunity to align with Bobby Kennedy III on this fun video series. Giving back is a continuous mission of SNAX-Sational Brands and as a family brand we are honored to work with such an incredible nonprofit.” - Adam Cohen, Chief Marketing Officer, SNAX-Sational Brands Group