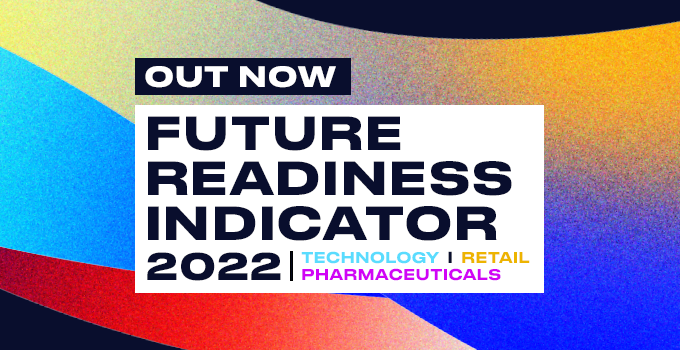 89 of the world’s largest Pharma, Tech, and Retail companies are ranked against their competitors in the latest Future Readiness Indicator 2022 released by IMD today

Lausanne, Switzerland, 13 December 2022: Nike, Google, and Roche topped the global rankings in their respective industries in the latest edition of the Future Readiness Indicator 2022 released by IMD today.

This year’s ranking benchmarks the resilience of the highest-grossing companies in three industries: Technology, Pharmaceuticals, and Retail (fashion, luxury & retail). According to the study, the pharmaceutical industry is forecasted to be the most recession-proof among the three sectors.

IMD released its first Future Readiness Indicator last December to benchmark the highest-revenue companies against their competitors by how future-ready they are for the post-pandemic economy and their likelihood of thriving in a world marked by fast and frequent change.

“Recessionary headwinds and other crises over the last year have ushered a reversal of fortune for Chinese companies losing ground to the U.S, “explains Professor Howard Yu, author of the Future Readiness Indicator report. “The big learning for companies this year? Diversity is king. Be it gender, race, or business diversity, single-mindedness may have brought them this far, but will won’t be as forgiving through 2023.“

The Indicator examines 39 top tech companies based on $5.1 billion to $469.8 billion in revenue, with data from 2015 to November 2022. The tech sector measures against the following criteria: financial fundamentals, investors’ expectation of future growth, employee diversity/ESG, research and development, business diversity, early innovation results, and cash and debt.

The tech company that has seen the most growth is NVIDIA at #3. This isn’t only thanks to shortages in semiconductor chips (their main competitor, Intel, was at #15 in contrast). NVIDIA nearly dominates the advanced chipset market regarding artificial intelligence. Google, Tesla, Amazon, and Meta are customers of NVIDIA. It’s also one of the few tech companies that continues to operate in both China and the US. At a time when the tech war is forcing brands to choose sides - NVIDIA and Microsoft are exceptions.

This year sees 12 new entrants in tech: eight semiconductor companies and Chinese giants Baidu, with JD.com, eBay, and Autodesk from the USA.

Microsoft jumped to 2nd place as Apple shot up four spots from 9th to 5th. Compared to other big techs, Microsoft and Apple have a balanced product portfolio, making them more resilient to the economic shocks leading to dominance over their competitors.

China’s reversal of fortune is an effect of the repercussions of its regulatory crackdown, which as a result, has reshaped the tech industry. Although Tencent held on to its 11th spot, Alibaba dropped nine places to 17th. JD.com, Alibaba’s competitor.

With less access to data, Meta cannot target its audience precisely as it used to. This affects not only Meta but Snapchat, Instagram, and TikTok – except for Google, not only for the world’s dependency on Gmail and YouTube, but because it operates Android. This is how Alphabet is consolidating the advertising industry where others are splintering. Only Alphabet has enough essential product offerings to counterbalance Apple’s move. While other big tech companies are barred from China, Microsoft has more than 9,000 full-time employees, 80% of which are R&D specialists and engineering technicians – an exception to the tech rule in the US-China tech war. 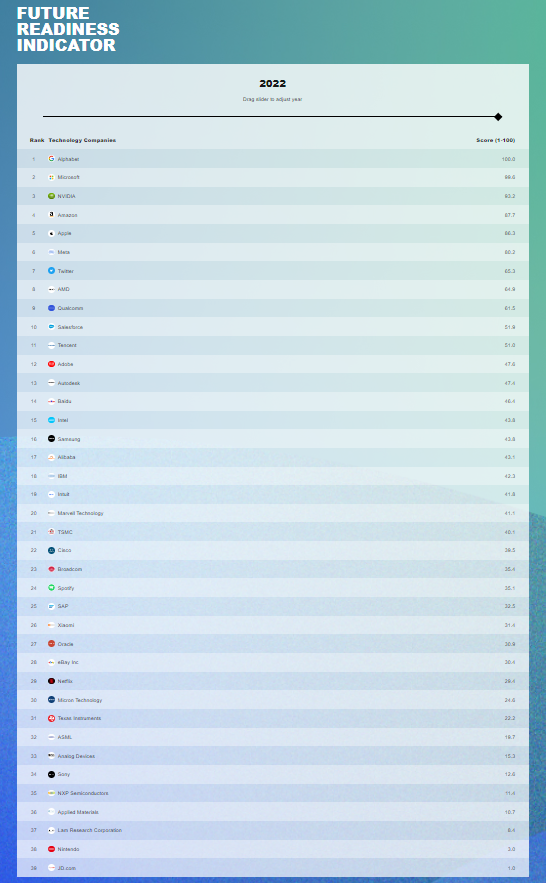 This year, Nike steals the #1 winning spot from Lululemon (2nd), followed by Kering, Hermes, and LVMH (5th). The biggest plunges were seen from Adidas, Under Armour, UK high street retailer Next, and Burberry who dropped four spots. The only non-luxury companies that break into the top ranks are sportswear brands Nike and Lululemon, primarily due to their stellar direct-to-consumer channel and by leveraging technology apps, digital supply chain, and omnichannel strategies to build a personalized community of influencers.

Luxury brands, however, have remained strong. Kering dropped from fifth to third place, followed by Hermes, LVMH, and Richemont. On the contrary, Burberry dropped four spots to 8th, followed by VF and Prada.

The results show department stores experiencing an underwhelming performance for Macy’s (22nd), TJX (23rd), Foot Locker (24th), Ross Stores (25th), and Nordstrom (26th), primarily due to the meteoric rise in e-commerce in the wake of the pandemic. High-street fashion also continues to lose appeal, further exacerbated by a lack of e-commerce. 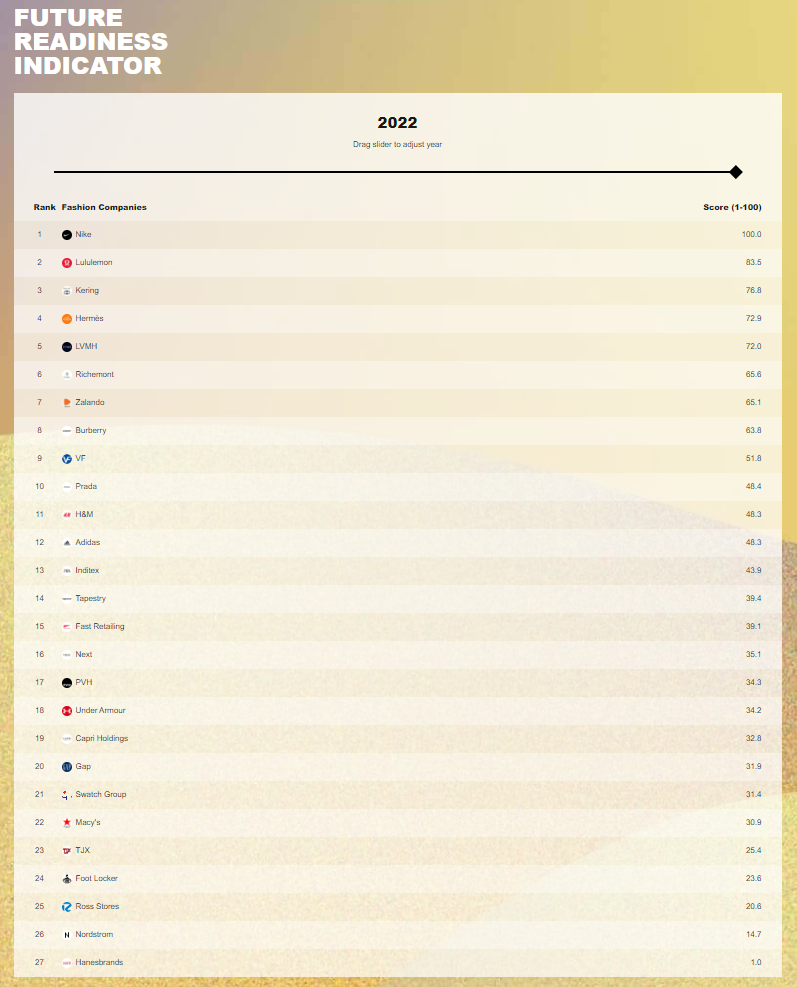 The Indicator examines the top 23 pharmaceutical companies based on $1.3 billion to $93.8 billion revenue, ranked using data from 2016 to November 2022. The pharma sector is measured against the following criteria: financial fundamentals, investors’ expectation of future growth, employee diversity/ESG, research and development, business diversity, early innovation results, cash and debt, and pharma pipeline. The last criteria is crucial in the pharmaceutical industry as it indicates drug-producing companies’ value and prospects.

The top three pharmaceutical companies in the ranking are Roche, Pfizer, and AstraZeneca. The research finds that pharma does not mirror the struggles of other industries and predicts that the healthcare industry will be recession-proof next year. The challenge in pharma is not about cash, but more about social responsibility and declining trust among the public. For pharma, ESG is not just about the carbon footprint but how the drugs are priced and made. Top pharmaceutical companies like AstraZeneca, Pfizer, and Roche invest more in R&D and less in marketing or central administration. Compared to the bottom companies in the ranking, they are more short-sighted and look more at marketing and money, which is detrimental in the long term. 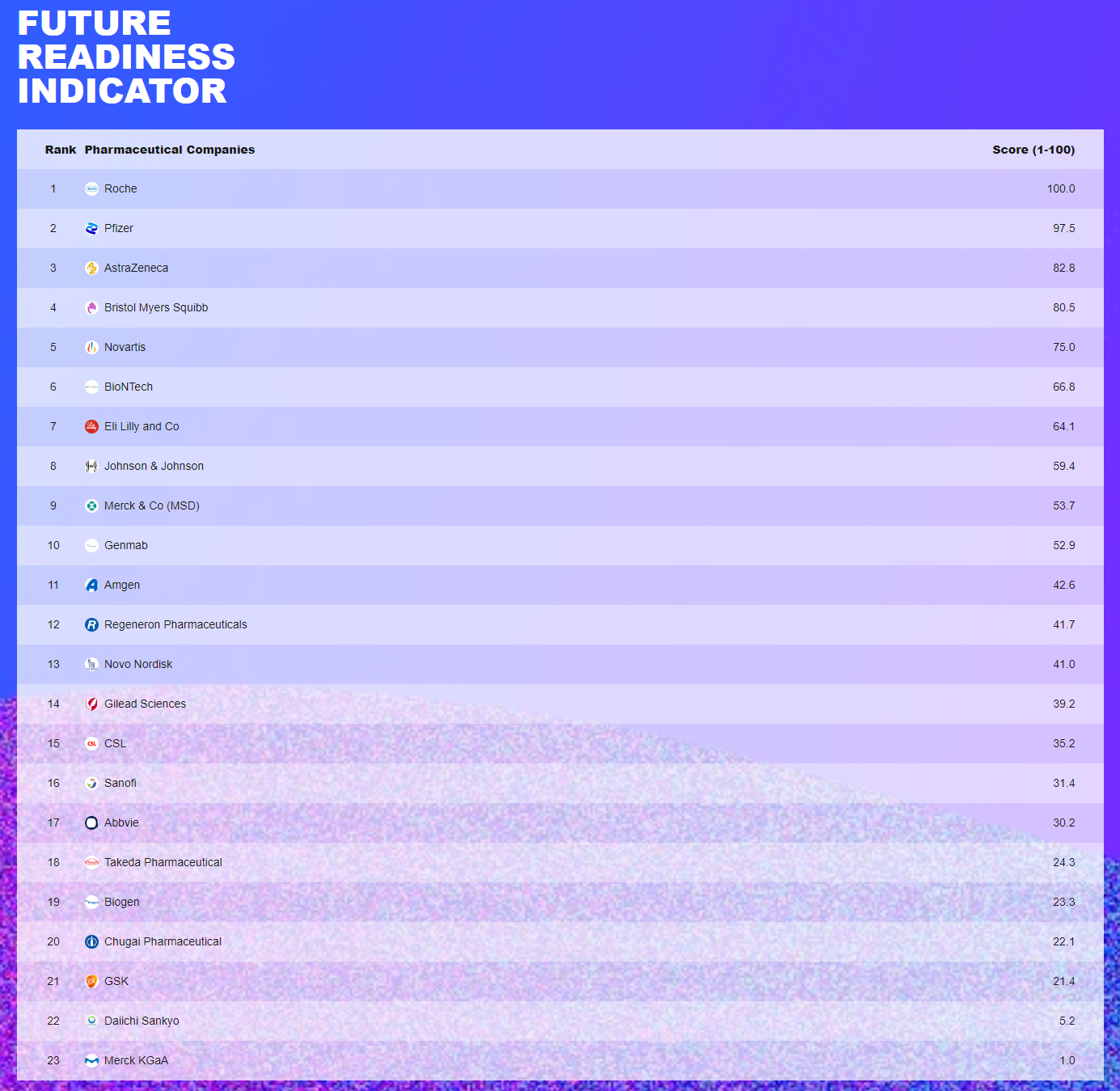 The market has seen a substantial influx of investment into ESG funds — over $1 trillion in the last two years – proving that brands increasingly recognize the business value of sustainability. Yet, ESG still lacks universal reporting standards or robust third-party verification.

The report finds purpose to be an important factor in determining a company’s preparedness for the future. But a purpose-driven company is not necessarily an ESG-compliant one. A purpose-led brand makes choices that prioritize more than profit: meaningful innovation and more diverse talent lead to more substantial investor expectations and fewer reputation risks. As a result, companies are better positioned to innovate, be resilient, and be more future-ready.

1. Diversify your business or become a “one-trick pony”: In the tech sector, having one winning product innovation makes a large number of existing unicorns a “one-trick pony”, which puts the startup economy at significant risk of failure next year. Companies with diversified offerings have a much stronger chance of survival, as displayed in the report by Microsoft and Google. This is relevant for pharma, too. A broader portfolio ensures resilience through the diversification of risks. mRNA vaccines were a game-changer, but what they reveal is something more profound. Those who have mastered genetic therapy – whether through manipulation of mRNA to create a vaccine or unleashing our immune system to fight cancer – are most prepared for the future. Given this, Roche at #1 might be a surprise, unlike Pfizer #2 and AstraZeneca #3, as Roche doesn’t create vaccines. Instead, Roche heavily invested in new capabilities such as biotechnology and computational science to constantly improve how drugs can be discovered.

2. Partner, partner, partner: The volatile economic environment and capital expenditure are incredibly challenging. Hence, the future readiness of a firm is all about strategic partnerships. Intel tumbles down the ranking as they lack the manufacturing capacity of TSMC. Unlike NVIDIA and AMD, they outsource their manufacturing to TSMC. Today, an organization cannot and should not do everything in-house. It is about collaboration, alliances, and winning together.

3. Purpose (ESG) is a brand’s best friend: The top spots of the ranking are dominated by purpose-led pharma brands such as Roche, Pfizer, and AstraZeneca, enabling their growth engine. These companies increasingly invest in R&D than marketing, legal, or administration. The idea is not to overspend on marketing and central administration. Firms need to be careful about mortgaging their future by cutting on R&D. For future readiness, the management teams of drug companies need to have people with deep knowledge of science. This is reflected in the readiness ranking as well. The drug company continues to put purpose at the center of growth to be able to run ground-breaking research. Pharmaceutical companies must move to new knowledge or capabilities, especially artificial intelligence. An independently owned biotech startup might excel in only one of these areas but being future-ready requires excellence in multiple categories.

4. Create stronger consumer connections in Retail & Fashion: The pandemic witnessed the rise in e-commerce and saw radical shifts in consumer behavior. The leading brands in the industry are the ones to demonstrate the strength of personalization and rely strongly on omnichannel marketing strategies.

Even as the economy heads for inflation and recession, future-readiness won’t be about curtailing expenses. Bracing for the recession today means investing toward building core capacities: R&D, diversification, and strong alliances while building enough cash reserves. Nike’s top position is an example of how, despite falling share prices, they have maintained their position by investing heavily in direct consumers. Winning firms stay true to their purpose. The top-ranking pharmaceutical companies all embrace purpose as the center for growth.

The Indicator bases its results on objective measurements to reach a composite score via an AI-driven algorithm and methodology to compare against the industry average. It uses hard data to rank companies against critical drivers of innovation: financial fundamentals, investors’ expectations of future growth, employee diversity/ESG, research & development, early results of innovation, business diversity, and cash and debts.